Interview With Rachel Jackson Author of It’s a PanDa Thing! 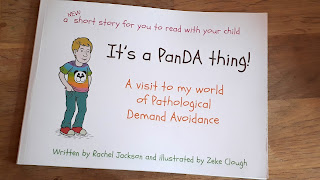 Q You have recently published It’s A PanDA thing!, with colour illustrations by Zeke Clough. Would you like to summarise what this book is about?

The book is a short picture story of a small boy (probably somewhere between 8 and 12) who finds he is a little different from other kids - but in ways that others might not even notice at first. It’s easier in a way to describe what it’s not - it’s not designed to be a textbook or a guidebook to PDA (because why would an 8-12 yr old want to read a guidebook?!) but more of a sing-song tale of what PDA might feel like from the boy’s perspective. The aim in a nutshell is to say to the reader “I know you don’t understand this and it’s hard - but it’s OK. We get you and it’ll be OK”.

Aside from the main story there are tips and guidance from the PDA Society and also from me about what seems to work with my son and with PDA in general - and of course a lovely personal foreword from Harry Thompson who reminded me most importantly that PDA is individual and that learning to work with it is about learning to connect with and respect the individual’s unique journey.

Q Would you like to tell me a little bit about yourself?

I am 45 years old - I think! I grew up in Suffolk with my older sister and parents. I worked in pubs whilst studying psychology BSc at royal Holloway uni in Surrey (all a bit posh for me but where I did my dissertation on Autism Theory of Mind) and after a few years back at home working for Eastern Electricity I moved to north London and worked as a consultant and coach in leadership, emotional intelligence and resilience.

Went self employed at 34 and moved to Derbyshire from where I had a “fuck it” moment and went travelling round south-east Asia and Australia/NZ aged 35 and met my South African husband in northern Thailand.

I still coach and consult in the same field but am now what I think is called a “slashie”! I’ve run a pizza van, I write books, I work with various clients and it’s all around my family.

Q What prompted you to write It's a PanDA thing! I understand this is the third book you have produced in this format?

The first book was prompted by my mum. I’d had a time where my husband was working long hours and I was lonely and bored in the evening and it was a throwaway comment she made to me - “why don’t you write a book!?”

I wrote the Thing in the five minutes spare whilst I waited for Leo to put his shoes on! It really happened that fast. A friend told me I should publish and I started looking for an artist who was either autistic or had direct experience with autism – and found Zeke.

The Brother book happened due to a statement by my youngest after an unusually bad week at school. “I must have one too!” He declared...so I realised I needed to write something that enables him to feel part of the picture.

The PDA book was a bit different. We are only at the early stages of understanding PDA and how it might form part of Leo’s profile. It’s answered some questions for us as a family and I wanted to share that with others who felt in the dark - but it’s been far more of a learning experience as I took on board so much I didn’t even know from working with the PDA Society. 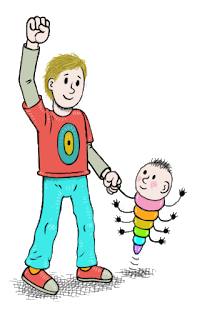 Q I heard through the grapevine that National Autistic Society regretfully said they couldn’t endorse your first book, The Thing: A young boy's journey with Asperger’s, because your portrayal of autism as a separate entity conflicted with their decision to use identity-first language (“autistic person”) over person-first language (“person with autism”). Is this correct?

I wasn’t even fully aware of the controversial depth of the person first debate until I stumbled into it after The Thing was published. I studied Autism at Uni and have never even considered that it was an ‘other’ apart from the child or adult. My language at home was always about having “something a bit different” not “some Thing a bit different” - but when it came to writing the book the thing developed a physical identity because it enabled me to talk to my son about autism at a time when he felt it was being done TO him in some way and that he wanted to escape from and assign blame to. The journey that The Thing takes is thus one of reconciliation and integration not separation.

I studied NLP (neurolinguistic programming) for some time and identified this with an activity we used often to help people to reintegrate different parts of themselves by enabling a conversation between the “on the one hand” and “on the other hand” parts of themselves - to begin to become whole and uncompromised.  I suppose I had that thinking in mind when The Thing was born - and I was thus really surprised at how strongly people like the NAS (National Autistic Society) felt about it all.

Q So, to your mind, The Thing actively encourages integrating, rather than separating children’s autistic identities?

Absolutely! I was really amazed when I heard that the desire to distance this new book from the first was so strong that I even had to de-capitalise the word ‘thing’ throughout the text. It was really not my intent to trigger such a response in the autism community. Quite the reverse.

“I’m keenly aware that the preferred way of describing autism (including our own at AuKids) is that it’s a part of your personality and for this reason, referring to it as The Thing may strike a few alarm bells. But actually, it’s a very clever method of personifying a part of you that may be a friend in some respects but a bewildering annoyance in others. Think of The Thing as more like an avatar and you’ll be closer to what the author had intended.”


I chose to stick with my original text having spent weeks gathering views from a huge group of online contributors in my Facebook page - not one of which had spoken about finding the characterisation of The Thing uncomfortable. It also felt genuinely me - and I wrote it from the heart - not the head. I suppose that’s where the PDA book is a bit different - it has more head in it because I was aware of the tensions in this field and the importance of getting around those to get on message. 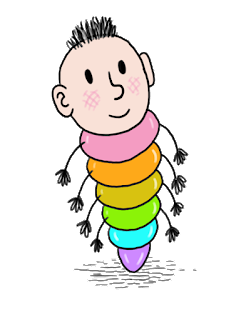 Funnily enough it was the PDA Society who first told me they were worried that The Thing looked like a scary caterpillar! Zeke (Zeke Clough, the illustrator) modelled it from an odd discussion about those plastic stacking rings we all had as kids - and we carefully aimed it as being non threatening, a little mischievous but never malicious or malevolent - in fact I think we did a survey online to check how the character would come across.

Anyway - it’s water under the bridge now and whilst I wish we’d managed to get the NAS on board - simply to get it to more kids who needed something that wasn’t a lesson - just a story - I wouldn’t go back and change what I wrote. I didn’t write the thing as a money making idea - in fact it will take me years to even get close to what I’ve spent making it ;-). But it mattered to me to try to help others in this space.

Q Do you feel It's a PanDA thing! is best read in conjunction with your first two Thing books?

I’m not sure it’s needed no. Whilst I’m told that the diagnostic road we’ve travelled isn’t at all unusual - ie for PDA kids to start off with ASD or Asperger’s diagnoses - I think PDA isn’t a diagnosis that many even reach. For me this book is just as likely to be picked up by a TA or a teacher than a PDAer and I pray that whoever picks it up helps to build awareness - because PDA is so different in so many ways to the public’s growing perceptions of autism. Autism is almost on trend in some ways. PDA can often look like the dark side of autism and people need to understand it.

Q How do you envisage the book being used?

I’d like to think PDA kids, if left casually in a room with this book, might just explore it long enough to feel someone gets them. I’d like parents professionals to read it to the kids they care for and work with. Eventually I’d love it to sit in schools where NT kids can start to understand neurodiversity.

Q Has your own PDA boy read it? And, if so, what has he made of it?

Ha. He has yes. I didn’t read it to him and make a big fuss about this one like I had the others. Partly because I’ve recently watched the Christopher Robin film and been struck by how resentful the character was about his father turning him into this circus of media coverage around his books. I don’t want my boy to feel like a character in his mums story in that way. We are also only just exploring PDA. We don’t have (and I may not seek) a diagnosis - not because I don’t believe in PDA – but just that he’s been diagnosed enough. I’m not sure he’s a classic PDAer either. He shows remarkable flexibility much of the time - when his anxieties aren’t triggered. But I have left it around and he has picked it up and read parts of it to me and asked if this was like him. I’ve been laid back about it and said that some of it seemed to be like him - but what did he think. I think jury is out for the moment. He likes that this character isn’t quite as simple as the thing. He’s growing up too and wanting to know why things are so hard for him. I have a feeling it’ll be something he comes back to. We have the “Me and my PDA” book for him to explore too so It’s a PanDA thing is really just the icebreaker. Maybe that’s it’s particular strength - starting what can be a confusing - but in my experience a cathartic conversation.