"Appearing sociable, but lacking depth" is counted as a PDA trait.  The National Autistic Society in their description of PDA say we “appear sociable, but lack depth in understanding” www.autism.org.uk/about/what-is/pda.aspx#.  PDA Society, describing this as surface sociability, explain it as:

Appearing sociable on the surface, e.g. People with PDA may have a more socially acceptable use of eye contact. Their conversational skills may appear better than others on the autism spectrum, but this is still often lacking depth in their understanding. For instance, not seeing a difference between themselves and an authority figure, having difficulty in adjusting their own behaviour in response to the needs of others and not always understanding how, or why their behaviour can affect others at an emotional level and thus have a negative impact on their relationships.
www.pdasociety.org.uk/what-is-PDA/about-pda

While I confess to being socially shallow in some ways (who isn’t?), I feel the above PDA “shallow water map” makes various false assumptions based on external appearances as observed from the neurotypical perspective. 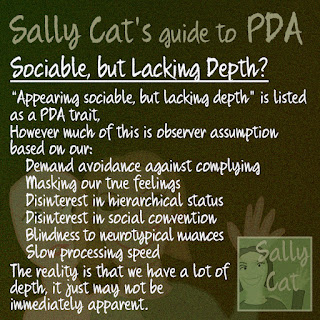 I will examine PDA Society’s definition point by point, and explain where I agree and disagree with it.

Using more eye contact than non-PDA autistics
I cannot speak for all PDAers, but for me making eye contact does feel uncomfortable.  I am aware, however, that it communicates to the observer that I am listening and interested, so I use it both as a courtesy and to communicate my intent more fluently.  Therefore, although I find eye contact uncomfortable, I am aware people may misconstrue my attitude towards them if I don’t use it.  I like to reassure people when I speak to them and put them at ease.  Similarly, I make a point of learning a few words of the native language when I visit non-English speaking countries.  This is not easy for me as I am dyslexic, but I like to communicate my respect and good will.  This is, I feel, a manifestation of my PDA masking and social mimicking drive (which I believe to be a hardwired part of me); I have an instinct to bend my being (mannerisms, expressions, gestures, vocabulary) in order to interface with whomever I talk to.  This takes effort, but I don’t resent it as it is a natural process for me.  I may however avoid social interaction because it is tiring.  So rather than saving energy by avoiding eye contact, if tired, I avoid interaction (fullstop). 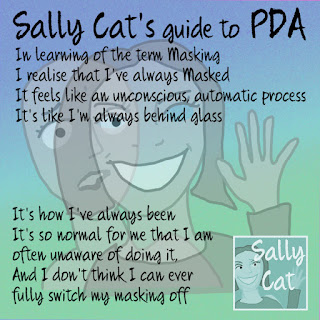 Having better conversation skills than non-PDA autistics
Again, I cannot speak for all PDAers (nor autistics), but enjoying wordplay appears to be a marked PDA trait  This coupled with our masking tendency (as described above) makes our having good conversation skills unsurprising.

It should, I feel, also be borne in mind that, by modern definition, autism is a much broader spectrum than earlier incarnations (which largely comprised “classic autism” and Asperger’s).  The PDA trait of masking and social mimicking is shared with female-pattern autism, which is a more recent “discovery”.  It is unclear if the above definition takes female-pattern autism into account when it states that “[PDAer] conversational skills may appear better than others on the autism spectrum”.

Often lacking depth in our understanding
This statement, being part of the definition of PDAers’ proposed lack of depth in understanding, is recursive (like Russian dolls) and, as such (with the greatest respect to PDA Society who I have massive admiration for) suggests in its failure to elaborate lack of understanding of our supposed lack of understanding!  It’s like explaining that a tiger is a mammal because it’s a mammal. Does your head hurt?  Mine does!  As this subtrait is the same as its “mother trait” I will move on from it until my conclusion.

Failing to differentiate between ourselves and authority figures
Unless I’m very much mistaken, this refers to our PDAer non-compliance with social hierarchy. I will write a dedicated blogpost about this in the future (note to self: do not let this plan become an internal demand or I’ll never write it!) but, in brief, we PDAers are motivated by individual merit rather than arbitrary status.  As far as I understand neurotypicals and other non-PDAers, adherence to social hierarchy is the norm for these “neurogroups”, kind of like they are neurologically hypnotised into social hierarchical compliance.  We PDAers are, I think, perfectly aware of hierarchy, but not hypnotised by its glamour.  I cannot therefore see that our imperviousness to hierarchy equates to lacking depth in social understanding. If anything, it demonstrates far deeper understanding rooted in an ability to evaluate individual merit. 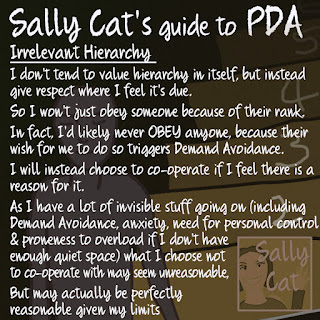 Failing to adjust our behaviour in response to the needs of others
Whilst I concede that I can on occasion be impervious to what others feel, in having discussed this with fellow adult PDAers, I think a number of additional contributing factors can come into play here.
1.    Demand avoidance: we may be perfectly aware of what others want, but avoid complying because we experience it as a demand.  This to me equates to non-compliance as opposed to lack of depth in understanding: we know what’s wanted, but avoid.
2.    Our masking and social mimicking drive often causes us to hide our true, deep feelings behind a bland mask: the depth is there, but observers would be hard pushed to see it.
3.    Slow processing speed: it is common for PDAers to need additional time to process communication, delaying our responses.  It can sometimes take me hours, weeks even to digest what someone meant.  To me this does not represent shallowness, rather temporary incomprehension.  This, by the way, is one of the reasons I prefer text-based communication over “live” as it gives me time to mull over what is said.
4.    Social nuance blindness: this is a common autistic trait entailing neurologically-rooted blindness to the more complex social cue reading neurotypical children develop aged seven or eight.

My social nuance blindness causes me to miss body language that neurotypicals take for granted at a subconscious level and, in turn, causes them to feel (rightly) that I am missing important chunks of their communication.  I try to compensate via my acquired repertoire of social mimicry, but this “social-blindness” leads to inevitable social blunders. I have been perplexed throughout life to have been treated as an idiot by my peers.  My discovery of female autism and resulting diagnosis five years ago was an explosive light bulb moment… no, not moment, but extended clarity as to why people had misread me as stupid.  So socially shallow in this respect?  I don’t think so, just not conversant in neurotypical nuance lingo.

Failing to understand how our behaviour affects others emotionally
I do relate, to my deep regret, to having failed to understand how my behaviour would affect others and I have, I have been able to see – oh too clearly – in retrospect how deeply I have betrayed and/or hurt some people and, in other cases, pushed them too far.  I may have appeared manipulative (another negative trait we PDAers are assumed to have, which will be the subject of a future blog) and I may have appeared heartlessly lacking in emotional depth, but I feel this is in large part due to the slow processing speed I described in the section above.  Further, my nuance blindness can cause me to totally miss “obvious” signs of emotional affect in others. 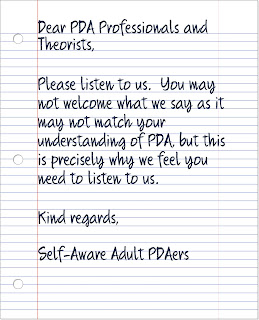 In conclusion, I feel that while we PDAers may in some ways "appear sociable, but lacking in depth", in reality we have a lot more depth than neurotypical observers may imagine.  I feel there has been far too much theorising about PDA from the outside looking in and, additionally, the focus has been on children.  Mythconceptions abound: that PDAers feel no shame during meltdown; that we are manipulative; that we are socially shallow.  The many PDAers I have come to know are anything but shallow.  We are highly compassionate and empathic, often driven to champion the underdog.  Yes, I have clumsily harmed others in my social naivety, but once realised these blunders have haunted me, even in my dreams.  I said on video at the PDA Society Conference in April (2018) that researchers and theorists should listen to us adult PDAers: what we say might not match their theories, but that is why they need to listen to us. (I fled the room before seeing myself on screen!)  So if you’re reading this, theorists, please consider that we PDAers are perhaps not so much “appearing social, but lacking depth” as “social, but with depth often concealed or delayed”.