Dysphoria: a state of unease or generalized dissatisfaction with life.

Rejection Sensitive Dysphoria is a neurologically-rooted overwhelming negative emotional assault triggered by perceived rejection (including self-criticism).  The impact of RSD is so strong as to block out everything else.  It is crippling and all consuming.  For me, it physically feels like sword blades stabbing through my body.  It is a truly horrible place to be in. 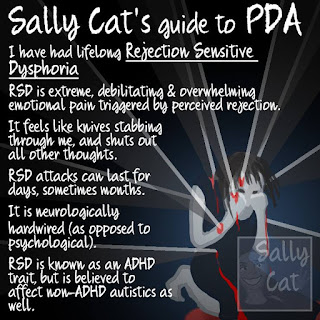 RSD is considered to be a unique ADHD/ADD trait, although some people believe non ADHD-autistics may experience it too, as discussed by Candidly Autsitic.  Although I relate to being ADHD as well as PDA, other autistic people I've talked with have reported very similar emotional dysphoria triggered by perceived rejection.

RSD is an all pervasive pain overriding everything else. It is so strong that (regardless of logic) it causes perceived rejection to feel intolerable.  Life during an RSD attack is Hellish: its negative blanks out all else.  It is much more than PDA/ADHD anxiety.  Its neurological nature is akin to pathological demand avoidance (i.e., it is not psychologically-based).  I feel it greatly exacerbates PDA's roller coastering emotional lability in that RSD enhances our already intense emotions, including anxiety and aggravates our intolerance of uncertainty ("do they hate me?"!)

My little girl, Milly (PDA awaiting ADHD assessment) displayed RSD aged two when I failed one time to tell her I was coming back for her at the front door for her in her push chair when I nipped ahead to unlock our downstairs flat door: I came back to her 30 seconds later to find her distraughtly saying, "no want Milly. No want Milly."

RSD can last for days, months or even years... although, from experience, the intensitity of the emotional assault tends to dwindle when spanning years, and periods of emotional freedom gradually increase: I had a years-spanning RSD attack following a relationship break up in my early twenties (although I had no idea that the Hell I was going through had a name at this point).  I remember observing after a year or two that I still thought of my ex every thirty seconds of my waking life – these relentless thoughts were heavy, despaired and gut punching: the kind of pain that caused me to roll around in emotional agony.  I couldn't express my experience to anyone else.  People talked about heartbreak and how you got over it, but I just didn't get over it and the overwhelming, relentless, stabbing horror just went on and on (and on). Cue ten years later and the pain was still there.

ADDitude Magazine says RSD can look "like an impressive, instantaneous rage at the person or situation responsible for causing the pain. 50% of people who are assigned court-mandated anger-management treatment have previously unrecognized ADHD."  I am greatly impressed how well members of ADHD, autistic and PDA forums get along together considering the prevalence of RSD amongst members: that one perceived rejection can trigger defensiveness which, in turn, can trigger further RSD, thus causing all Hell to break loose.  Sadly, sometimes it does.  RSD does cause perceived rejections and criticisms to feel oh too real and, as a consequence, group members can sometimes feel vicously attacked.  As I have said, very thankfully, this fall out is rare.

Interestingly also, ADDitude Magazine goes on to say that people may cope with RSD by scanning "every person they meet to figure out what that person admires and praises. Then, that’s the false self they present"  This to me sounds like social mimicry and masking.  Might RSD be behind our PDA masking-drive?