How I understand PDA (in language kids can understand)

Some people, both children and adults, have brains that say “no” to everything.
It’s a bit like a switch that flicks down as soon as we think of doing anything, even things we wanted, like eating cake. It makes the idea of doing these things feel very bad so we want to avoid them. This is known as pathological demand avoidance.

Pathological demand avoidance happens without us thinking about it, so we often don’t notice it, and the bad feelings it gives us (like eating cake being horrible) can seem real.

We often only notice it when something is pushed on us by someone else, like brushing our teeth or going to school. We can’t just forget about it, because someone keeps telling us that we have to do it. This can create a big problem because our pathological demand avoidance will keep telling us “no, don’t do it, it’s bad!” This is one reason it’s called demand avoidance (instead of thing avoidance): it only really shows up when people demand things from us, even though it is there all the time, and can makes us not want to do things we had really wanted to do (like eating cake, going to play outside or reading a story we’d been excited about).

Another reason it’s called demand avoidance is because even things that weren’t demanded of us (like thinking of putting on a coat) can feel like nasty demands as well. 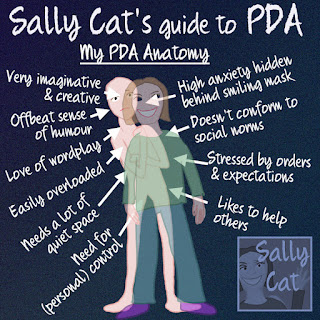 Features of PDA
Pathological demand avoidance is called PDA for short. It’s a bit it’s confusing because PDA means the action of the switch telling us not to do stuff, and also is the name for the type of brain we have.

The PDA brain is one of many different brain types. PDA brains aren’t all exactly the same, but they always have a few things in common with each other:


We often like other children and adults, but may: 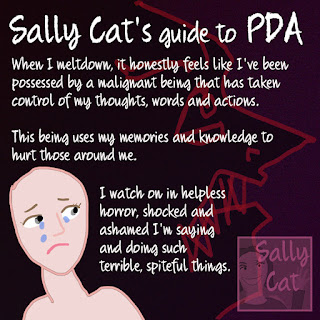 Meltdowns
Not all PDA brains are the same. Some of us can’t help shouting, screaming or hitting people when things feel too much; some of us might feel they have to run away; and others just cry a lot, or find ourselves arguing or demanding things we don’t really want. Whether we hit people, run away or cry, when we find ourselves stuck doing things we can’t control, it is called a meltdown.

Other people are often confused and upset when we have a meltdown because we seem angry or difficult for no reason. They probably don’t understand that we can’t help what we are saying and doing.

Meltdowns happen when our PDA brains are overloaded and can’t cope any more. It’s a bit like shaking up a bottle of fizzy drink and unscrewing the lid. Having lots of quiet space helps us to avoid meltdowns (just like fizzy drinks don’t explode if you don’t shake them up before opening the bottle).

Having lots of demands put on us (things like “go to school”, “sit still”, “wash your face”) tire us out (put us into overload) because we have to fight with so much pathological demand avoidance.

People who don’t understand PDA can be surprised when we have meltdowns after they tell us what to do a lot. 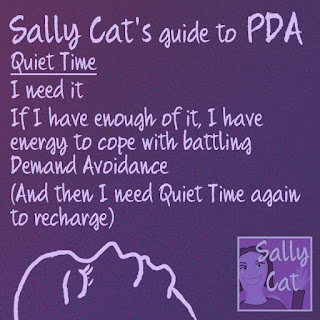 Quiet time need
They may also not understand how much quiet time we need and call us lazy, but PDA brains need lots more quiet time than other types of brains. We may think we are lazy as well, because other children and adults don’t need as much quiet time as us, and our pathological demand avoidance stops us from doing things that other people do. 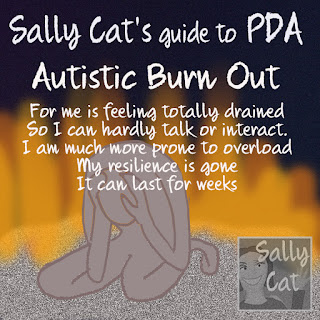 Burnout
As well as causing meltdowns (where our emotions take control), not having enough quiet time can cause burnout (where our brains run out of energy). It can take a very long time to get our energy back from burnout, and we need even more quiet time than normal to recover from it. 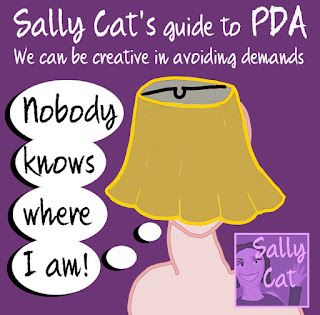 Creativity
PDA brains are often very creative. We are often good at coming up with new ideas.

We are also often good with words and may enjoy playing with them, for example, inventing new names for people and pets and making up rhymes. 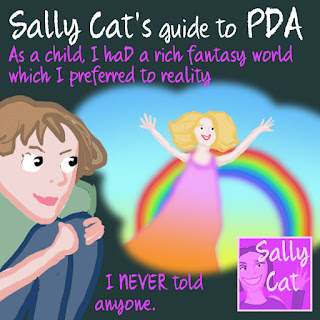 Daydreaming and roleplay
PDA brains are often very good at imagining and making up stories. Some of us invent very complicated fantasy stories which we may daydream to ourselves, or act out in real life. When we act things out in real life it’s called roleplaying.

PDA daydreaming can help us through difficult times that we can’t get out of. Daydreaming can comfort us if we don’t want to, or can’t play with other children during school breaks; if we are stuck in a classroom; or if we can’t get to sleep at night. We may find ourselves daydreaming more often if we are very sad or worried. Our daydream stories are often about us being in control. Being in control is important for PDA brains, and daydreaming about it can help us feel better when we don’t have much control in real life. 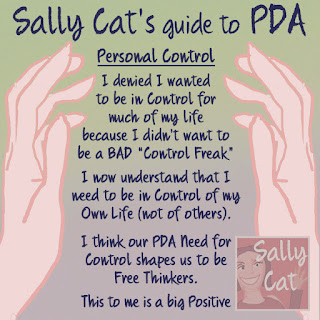 Control need
The PDA need for control is very, very strong. It’s not about having power over other people, but about having control over our own worlds. Demands can be thought of as all the things we are not in control of (having no choice about going to school; brushing our hair, tidying our rooms, etc), so having control means we are avoiding demands (PDA brains always want to avoid demands). This is why it helps us to be given choices: choosing allows us to be in control of our worlds. Feeling like we might lose control (so not be able to avoid demands) can make us feel very anxious. 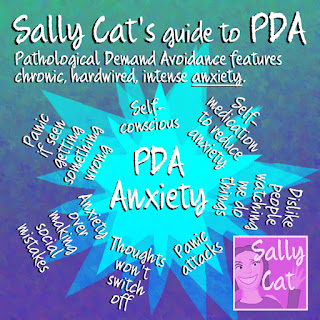 Anxiety
Although high anxiety (worry and fear) is a feature of PDA, many of us don’t even notice feeling it, because it has always been there so it is normal for us. 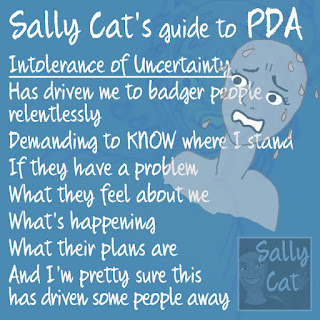 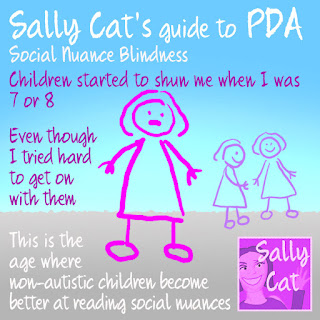 Problems with other children and adults
Our PDA control need may make it hard for us to keep friends because they don’t like us telling them what to do. For others, we may feel very shy and find it difficult to even talk to other children.

We often find being with other people (children and adults) very tiring, and need quiet time to get our energy back. If we can’t have quiet time, we may get overloaded and find people annoying.

We may find it difficult to tell what other children and adults are thinking and feeling. This can be because our PDA brains aren’t able to read all the face, body and voice signals that other types of brains can see. Sometimes we may feel confused if other children treat us like we are stupid because we didn’t read all their signals, but we can understand people very well in other ways. 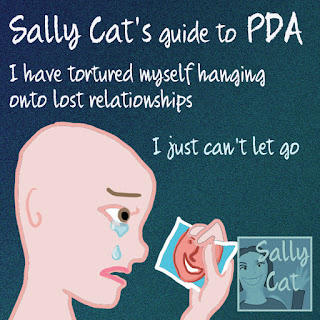 Obsessions about people
Although we may have these difficulties getting along with other children and adults, we do tend to be interested in people. Our interest in a particular person may become so strong so that we find it hard to stop thinking about them. 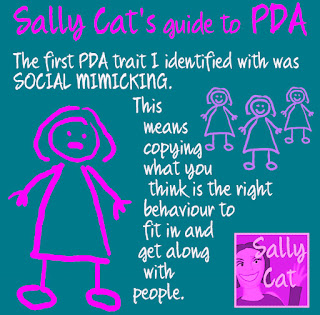 Masking
Many of us (both children and adults) want to seem the same as everyone else and hide what we feel is different about ourselves. We may try to not to show it if we feel upset, scared or angry. This is called masking. One type of masking is copying how other children or grown ups act and speak, this is called social mimicking. 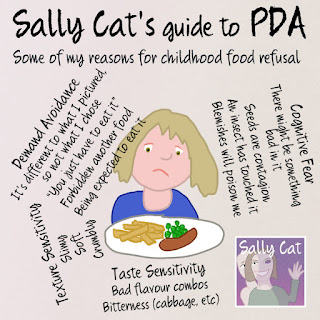 Being fussy with food
We can have lots of problems with food. First of all, our pathological demand avoidance can cause us to not want to eat things if they feel like a demand. This could be because we weren’t asked what we wanted to eat; or because we are expected to eat it all up. Our pathological demand avoidance can then make these foods feel nasty to us so we want to avoid them.

Many PDA brains are also very sensitive to tastes, textures and smells. This means foods that might taste, smell and feel fine to other people, might not be nice for us. 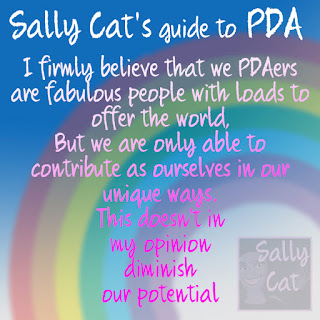 Liking to help people
Although our pathological demand avoidance causes us to say “no!” if people ask us to do things, we often do like to be helpful. We just need to do it because we have chosen to. We probably won’t want to help though if people expect us to (because this may feel like a demand). 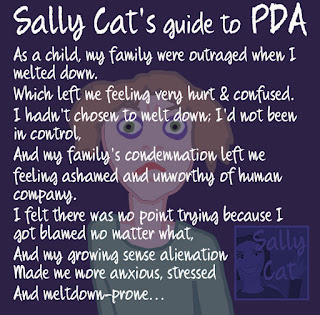 What doesn’t help us
Treating us as if we have a different type of brain doesn’t help us. Our PDA brains respond differently to things, such as demands, than other types of brains. Our pathological demand avoidance isn’t a habit that we can learn to let go of.

Punishing us for avoiding things or having meltdowns doesn’t help either.

Telling us that other children cope with things that we can’t cope with often just makes us feel bad, but we can’t change what type of brain we have.

Telling us we just have to do things will make our pathological demand avoidance worse. 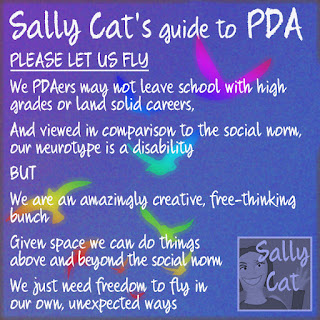 Understanding how our PDA works helps us to feel OK about ourselves too. 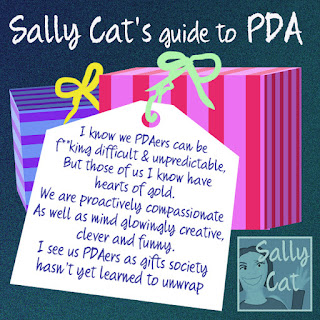 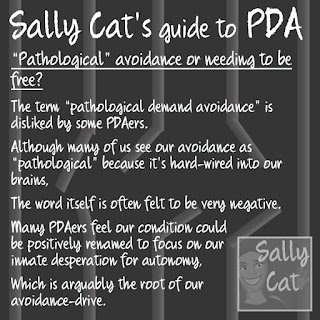