I’ve often come across parents saying their kids have rejected their PDA diagnoses; as well as parents of adult children who outright refuse to consider the idea of being PDA at all.

I believe it best to be cautious about disclosing PDA (or other diagnoses) to PDAers. I’m not saying that information should be totally withheld, but that I think it’s important to bear in mind that we PDAers (both kids and adults) are likely to totally reject labels. This is a fundamental aspect of our PDA demand avoidance.

This is contrary to current autism best-practice wisdom, which states that children should be told of their diagnoses immediately because they will have already realised they are different to their peers, so concealing diagnoses withholds necessary information for helping them understand why they’re different.

However, I don't believe this is generally best practice for PDA kids. Although PDA is classed as as an Autism Spectrum Condition, it’s known that some autism strategies are ineffective, if not disastrous for PDA children. For example, adhering to familiar routines, and being explicit about what is required.

Similarly, adults suspected of being PDA are unlikely to accept being told of this. While few people (of any neurotype) would welcome being armchair-diagnosed by friends or family, I think we PDAers are especially resistant. 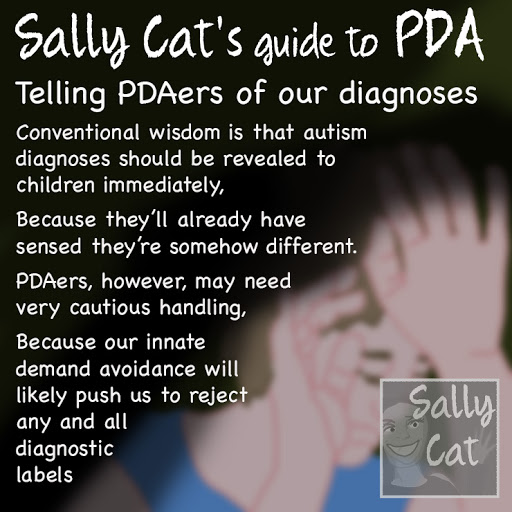 PDA is not “just autism”

The autism spectrum is an invention of the 2013 DSM-5, which has led many people to assume that everyone fitting the criteria for autism spectrum diagnosis is essentially the same; and that autism is all one, homogenous, indivisible thing, where one size fits all.

PDA misfits this stereotype. its classification as an ASC (Autism Spectrum Condition) does not mean that it is the same as “general autism”. Despite matching the DSM-5’s Autism Spectrum diagnostic criteria, PDA is neurologically unique. And it is this neurological uniqueness that, I believe, is of crucial importance when considering how to broach diagnosis to children. In other words, it’s not all “just autism”. Saying PDA is “just autism” because it’s classed as an ASC, is like saying basketball is the same as football because they’re both ballgames; or that the French language is the same as Italian because they’re both Romance languages. So, yes, PDA –despite being classed as an Autism Spectrum Condition– does not flourish under all the strategies that work for general autism; and disclosure of diagnosis, I believe, is a case in point.

While PDA children (such as the younger me) will likely be aware of having some kind of big difference from our classmates, there’s a strong likelihood our PDA avoidance will drive us to reject any labels we’re given. Being told we are autistic/PDA/or anything else is an imposed label. We PDAers need to find things out for ourselves. This gives us the vital sense of ownership we need to accept ideas as or own, and free from the crushing demand of other people’s opinions about who we are.

My personal experience
I gained my own PDA diagnosis recently because I found out about PDA for myself, then really wanted to be diagnosed. A major, ongoing battle followed for me to gain my PDA diagnosis, but I refused to give up when told it was impossible.

Conversely, my ten-year-old daughter, Milly, has had a PDA diagnosis for half her life, but I have intuitively not told her of it. While this flies in the face of current autism best practice wisdom that children should be told of their diagnoses immediately, I sensed that telling her she’s officially labelled as qualitatively different from other children would distress her. Her PDA brain automatically resists being labelled. On top of this, she –like me– is a natural masker who doesn't want to be different from her peers. My intuitive response has been to talk to her about general neurodivergence traits when she's in the mood, using myself as an example, and giving her space to identify as and when she feels a connection to the things I talk about (e.g. masking; having difficulties knowing how to respond socially; and automatically wanting to avoid things). I am careful not to try to drive her to respond or connect. Additionally, I know not to tell her "you are X, Y, or Z" because I’m aware this would backfire, and she'd not only refuse to accept the label in question, but actively avoid it, meaning she'd lose any benefit of understanding of that aspect of her neurodivergent wiring. So my parental strategy for alerting my daughter to her PDA, and her broader neurodivergence, is to provide her with a ‘pocket atlas’ of neurodivergent conditions for her to refer to if she wishes, and put forward the attitude that difference is both normal and OK.

There is the sticky point that she’s unaware of her formal diagnoses. I’m not easy that she’s unaware of them. It troubles me a lot, to be honest. Had she initially been assessed for autism when older (she was three at the time of her assessment) my intuition might have been different; especially if she’d had major school or other issues she’d been aware of preceding her diagnosis.

What I urge parents to do is to tread very lightly when considering how to tell their PDA children of diagnoses. It might be that they’ll 100% benefit from knowing about them, or it might be that their PDA brains will totally reject their diagnostic label/s and it would be more effective to drip feed them information about PDA, etc, when they’re in the mood to take it in, and without explicitly telling them “this is how you are”.

We PDAers tend to need to find things out for ourselves so we have a sense of ownership.

I’ve come across many comments from parents, and other close people, who strongly suspect an adult is PDA, but are frustrated that the person in question refuses to explore the idea. I totally get the frustration of the people who want these suspect PDAers to explore their potential PDA, but also understand that they’re really not going to want to if they truly are PDAers. In a way, it’s a kind of litmus test: those of us who most resist PDA label suggestions may most likely be PDA because the very nature of our neurology prohibits accepting other people’s options about who we are.

What best to do? Well, I’m not a guru, but can give you my two cents. If you have an adult in your close family whom you suspect to be a PDAer who you wish to help (or, as is often the case, you wish to help yourself and other close family through their identifying as PDA), you’ll likely get nowhere by trying to press them into identifying. In fact, your active hope that they’ll identify as PDA will likely trigger their PDA avoidance to big time reject the idea for ever and then some.

What may be more effective is to quietly implement PDA strategies in your interactions with this person. There is a good summary of PDA strategies on this PDA Society webpage: https://www.pdasociety.org.uk/life-with-pda-menu/family-life-intro/helpful-approaches-children/ 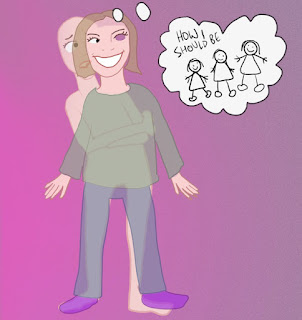